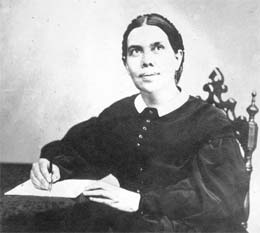 "Another parable put He forth unto them, saying, The kingdom of heaven is likened unto a man which sowed good seed in his field; but while men slept, his enemy came and sowed tares among the wheat, and went his way. But when the blade was sprung up, and brought forth fruit, then appeared the tares also."

"The field," Christ said, "is the world." But we must understand this as signifying the church of Christ in the world. The parable is a description of that which pertains to the kingdom of God, His work of salvation of men; and this work is accomplished through the church. True, the Holy Spirit has gone out into all the world; everywhere it is moving upon the hearts of men; but it is in the church that we are to grow and ripen for the garner of God.

"He that sowed the good seed is the Son of man. . . . The good seed are the children of the kingdom; but the tares are the children of the wicked one." The good seed represents those who are born of the word of God, the truth. The tares represent a class who are the fruit or embodiment of error, of false principles. "The enemy that sowed them is the devil." Neither God nor His angels ever sowed a seed that would produce a tare. The tares are always sown by Satan, the enemy of God and man.

In the East, men sometimes took revenge upon an enemy by strewing his newly sown fields with the seeds of some noxious weed that, while growing, closely resembled wheat. Springing up with the wheat, it injured the crop and brought trouble and loss to the owner of the field. So it is from enmity to Christ that Satan scatters his evil seed among the good grain of the kingdom. The fruit of his sowing he attributes to the Son of God. By bringing into the church those who bear Christ's name while they deny His character, the wicked one causes that God shall be dishonored, the work of salvation misrepresented, and souls imperiled.

Christ's servants are grieved as they see true and false believers mingled in the church. They long to do something to cleanse the church. Like the servants of the householder, they are ready to uproot the tares. But Christ says to them, "Nay; lest while ye gather up the tares, ye root up also the wheat with them. Let both grow together until the harvest."

Christ has plainly taught that those who persist in open sin must be separated from the church, but He has not committed to us the work of judging character and motive. He knows our nature too well to entrust this work to us. Should we try to uproot from the church those whom we suppose to be spurious Christians, we should be sure to make mistakes. Often we regard as hopeless subjects the very ones whom Christ is drawing to Himself. Were we to deal with these souls according to our imperfect judgment, it would perhaps extinguish their last hope. Many who think themselves Christians will at last be found wanting. Many will be in heaven who their neighbors supposed would never enter there. Man judges from appearance, but God judges the heart. The tares and the wheat are to grow together until the harvest; and the harvest is the end of probationary time.

There is in the Saviour's words another lesson, a lesson of wonderful forbearance and tender love. As the tares have their roots closely intertwined with those of the good grain, so false brethren in the church may be closely linked with true disciples. The real character of these pretended believers is not fully manifested. Were they to be separated from the church, others might be caused to stumble, who but for this would have remained steadfast.

The teaching of this parable is illustrated in God's own dealing with men and angels. Satan is a deceiver. When he sinned in heaven, even the loyal angels did not fully discern his character. This was why God did not at once destroy Satan. Had He done so, the holy angels would not have perceived the justice and love of God. A doubt of God's goodness would have been as evil seed that would yield the bitter fruit of sin and woe. Therefore the author of evil was spared, fully to develop his character. Through long ages God has borne the anguish of beholding the work of evil, He has given the infinite Gift of Calvary, rather than leave any to be deceived by the misrepresentations of the wicked one; for the tares could not be plucked up without danger of uprooting the precious grain. And shall we not be as forbearing toward our fellow men as the Lord of heaven and earth is toward Satan?

The world has no right to doubt the truth of Christianity because there are unworthy members in the church, nor should Christians become disheartened because of these false brethren. How was it with the early church? Ananias and Sapphira joined themselves to the disciples. Simon Magus was baptized. Demas, who forsook Paul, had been counted a believer. Judas Iscariot was numbered with the apostles. The Redeemer does not want to lose one soul; His experience with Judas is recorded to show His long patience with perverse human nature; and He bids us bear with it as He has borne. He has said that false brethren will be found in the church till the close of time.

Notwithstanding Christ's warning, men have sought to uproot the tares. To punish those who were supposed to be evildoers, the church has had recourse to the civil power. Those who differed from the established doctrines have been imprisoned, put to torture and to death, at the instigation of men who claimed to be acting under the sanction of Christ. But it is the spirit of Satan, not the Spirit of Christ, that inspires such acts. This is Satan's own method of bringing the world under his dominion. God has been misrepresented through the church by this way of dealing with those supposed to be heretics.

Not judgment and condemnation of others, but humility and distrust of self, is the teaching of Christ's parable. Not all that is sown in the field is good grain. The fact that men are in the church does not prove them Christians.

The tares closely resembled the wheat while the blades were green; but when the field was white for the harvest, the worthless weeds bore no likeness to the wheat that bowed under the weight of its full, ripe heads. Sinners who make a pretension of piety mingle for a time with the true followers of Christ, and the semblance of Christianity is calculated to deceive many; but in the harvest of the world there will be no likeness between good and evil. Then those who have joined the church, but who have not joined Christ, will be manifest.

The tares are permitted to grow among the wheat, to have all the advantage of sun and shower; but in the time of harvest ye shall "return, and discern between the righteous and the wicked, between him that serveth God and him that serveth Him not." Malachi 3:18. Christ Himself will decide who are worthy to dwell with the family of heaven. He will judge every man according to his words and his works. Profession is as nothing in the scale. It is character that decides destiny.

The Saviour does not point forward to a time when all the tares become wheat. The wheat and tares grow together until the harvest, the end of the world. Then the tares are bound in bundles to be burned, and the wheat is gathered into the garner of God. "Then shall the righteous shine forth as the sun in the kingdom of their Father." Then "the Son of man shall send forth His angels, and they shall gather out of His kingdom all things that offend, and them which do iniquity; and shall cast them into a furnace of fire; there shall be wailing and gnashing of teeth."